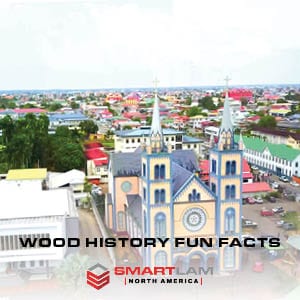 In the capital city of Paramaribo in the country Suriname, located in the north of South America, there stands a cathedral that is one of the biggest wooden structures in the Western Hemisphere. Construction began in 1883, consecrated in 1885, with the towers not being completed until 1901. In 2010 the cathedral underwent a major restoration and was assigned as a minor basilica in 2014.

This structure is 194 feet long, 54 feet wide and 48 feet tall in the main part of the building. It has enough space for roughly 900 people, with over 10,000 square feet of floorspace. Interestingly, the three bells in the west tower weigh over one and a half tons combined. (3288 pounds to be exact)

Saint Peter and Paul Cathedral’s home country, Suriname, is a country dominated by forests. This has been a massive contribution to their ability to become the first country to achieve carbon neutrality. It is considered to be a part of the Caribbean culturally, although Dutch is the official language of government, business, media and education. Interestingly, Suriname is the only sovereign nation outside of Europe to speak Dutch by most of the population.